Crusty rusty gross looking skillets that have cooked with oven cleaner in a bag for over a week!

I have had a couple old cast iron skillets for a number of years.  I love them and use them often.  My little one is perfect for frying up a couple eggs.  The 9 inch pan has held the ingredients for a pineapple upside down cake many times through the years.   I recently came across a 12 inch pan and it was in really bad shape.  It was in an abandoned oven and had so much nasty stuff caked on there was no way it could be cleaned, or so I thought!

I have seen a couple threads on Facebook as well as pins on Pinterest on how to restore old cast iron.  I decided it was time to give it a try.  My pans could use some tidying up and the one I just got was in dire need of some help.

I knew I was going to have to use chemicals to do this job.  I simply do not have the physical strength to scrub at something like this repeatedly as I knew it would require.   I have tried the vinegar and soak method for oven racks with very poor success.  There was not going to be another way and I was resigned to it.  So I took the project outdoors and kept it quite contained.   I gathered my tools which were a big garbage bag, a pair of rubber gloves, and Easy Off Oven Cleaner.  I also made sure to have water nearby in case of contact with cleaner and I did it on a windless day! 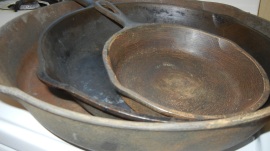 The insides had rust and charred baked on grime.

The first application only got the greasy mess off. There still is many layers of charred mess on here.

Both the larger pans were really rough even after one run with the oven cleaner.

I unfortunately didn’t think about pictures until after I had already sprayed the pans and let them sit.  The slimy mess in the bag is after they had sat for a week in the 80 degree sun, baking with the oven cleaner on them.   These first pictures are AFTER one attempt.  I had taken all the pans and placed them one at a time in the bag.  I would hold open the bag and use the plastic to turn the pan this way and that.  Then I put in the next pan and sprayed it.  I really soaked them with the oven cleaner.    I did this for all 3 skillets as well as a broiler pan I had found.   That broiler didn’t take the cleaner well.  I should have tested it on the bottom first!  Live and learn I always say.

I waited another 10 days and scrubbed all the goopy mess off again.  There was still some caked on nasty stuff on both the larger skillets.  So one more spray and another 10 days and today I gave them some attention again.  The 12 inch skillet is looking quite good.  All of the crusty mess is gone.  The small one has nothing left except a decent amount of rust.  The 9 inch pan still has some hard baked on mess so I will spray it one more time really soaking it and let it sit for 2 weeks.

I gave the pans a good soaking in a sink full of water with about 4 cups of vinegar in it.  The vinegar is supposed to help get rid of the rust.  I let them soak for about 90 minutes.  I took a steel wool pad to them and scrubbed some while rinsing them under running water.  I placed all the pans in the oven and turned it on to 250 degrees to let them dry and give them a slow heat.  After 5 minutes I took some paper towels and while using my lovely blue hot mitts I  rubbed Coconut oil all over each pan being liberal with the oil, but not having enough for it to pool anywhere.  I then placed both the skillets upside down in the oven and turned it on to 450.  WARNING!!!!  This causes smoke!!!  After about 20 minutes I had my fire alarm going off and had to open all the windows and I set the fan in front of the oven to blow the smoky air out the window!

A soak in the sink to help remove residual gunk and rust.

This worked well, except for the smoke! At such high temps I would most likely have smoke for any oil used. 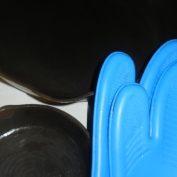 These mitts are rated for high temps up to 500 degrees. I always use them when baking.

I turned off the oven and again, using my mitts brought the pans out, wiped them thoroughly with paper towel which turned dark with the iron from the skillet.  I applied more of the oil and put them back into the oven while it was cooling.  I let them set there for over an hour.  I then wiped them again and made one more very thin application of oil and left them to sit in the oven upside down.

They sure look pretty now.  I can’t wait to make a BIG pineapple (or maybe another local fruit like blueberry) upside down cake really soon in that 12 inch pan. 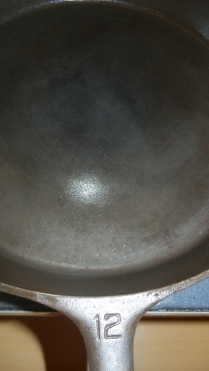 Ready for an Upside Down Cake!

All the grim and gunk off the sides and it is shiny.

This is looking so nice. I can even see what it is!

As a note:  This is the only harsh chemical I have used for cleaning since I have lived here.  I mostly use Shaklee’s Basic G and Basic H or the homemade vinegar cleaner I make with oranges.  If I could have figured out another way without the harsh chemical I would have.  If you know of a way that truly works without lots of muscle (scraping and using wire brushes and scraping) or without a lot of cost (sandblasting), please let me and all my readers know!  Thank you so much.

Top 10 of Anything and Everything